A GRAPHICAL MODEL OF THE DISTORTION THEORY 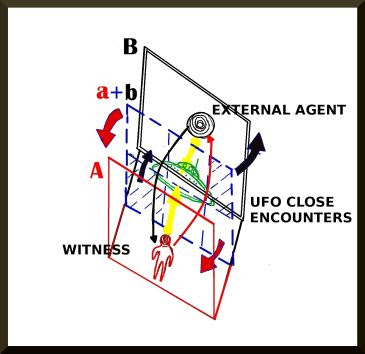 The witness of the UFO close encounters is located in "reality A" (our known reality), from a reality B (much more extensive than ours), an unknown External Agent communicates with our psyche. As a result of this "interaction" a new cognitive reality is created which is composed of a union of both, A+B.
In this new dimension (A+B) an "image" is projected that recreates a fictitious encounter with extraterrestrial beings, from the psychic information that the External Agent extracts from the witness's unconscious. This reality (A+B) mediates both superimposed realities, and parts of this new reality (A+B) are divided between our reality (A) and the reality of the External Agent (B).
In other words, this new reality (A+B) manifests itself, only in parts, in our reality (A), and the other parts stay in reality B. Therefore, UFO incidents contain a double composition, apparently antagonistic, a physical part and a psychic part, since this paradigm does not manifest itself categorically in either of the two realities, otherwise UFO encounters would be purely physical episodes, or psychic, but not both connected.
It is as if this new dimension carries components of both universes, without being able to concretize a profound reality. As if the witnesses were on a border between both realities without being able to clearly discern the content of reality B, and only produce certain involuntary and uncontrolled "interferences" that are concretized in the projection, since this new reality (A+B) emanates from a remarkable conjunction that manufactures a complex "psychic architecture".
Therefore, while the UFO experience is taking place, the "effects" of this projection are distributed between both realities (A) and (B) and so on occasions, the encounters will contain matter and on others not, depending exclusively on the interaction of each witness and on the capacity to "drag" the new reality (A+B) towards ours (A). In the same way, the physical traces and traces found after the landing of a UFO may contain a great ambiguity as they are not really produced by a physical phenomenon, such as those operating in reality A.
In other words, we could find few footprints of humanoids in their descent, other marks simply would not exist or on the contrary, in the take-off of the UFO, it could cross the vegetation as if it were a ghostly apparition. However, if the experience, the projection, the creation of this new reality (A+B) is mostly fragmented towards reality B, it is likely that they are episodes of a broad psychic spectrum.
Therefore, the Distortion theory establishes that we are facing a cognitive paradigm projected from an unknown reality (B) in which we are inserted, even if we do not manage to perceive it.
From this dimension, an External Agent is able to "tune in" and "interact" with the psyche of witnesses and show parts of this vast psychic universe with broad repercussions for the human being. However, as this interaction takes place in an involuntary and uncontrolled way, it makes it impossible to dissect correctly what is perceived in this new stage of consciousness. It should be noted that the External Agent is only the "vehicle" that connects us with reality B, and perhaps only one of many forms that our psyche has can access this mental universe (psychic disorders, altered states of consciousness, drugs, hypnosis, shamanic travel, creativity, etc.). Although in all these cases, the connection with reality B is made directly and is more likely to lack any type of physical entity.