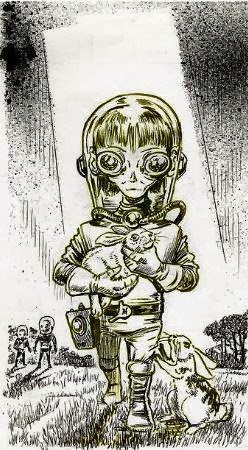 November 14 1954, on the Isle of Ortonovo (La Spezia), in northern Italy, Amerigo Lorenzini, a farmer, 48, was at his farm when he heard a sound like the flight of swallows.
Looking to the sky, he observed a strange resplendent artifact that almost blinded him.
Descending, it decreased its luminosity, and he found that it was a cigar shaped object that landed in the garden of his farm. Through a side door of the mysterious aircraft, which gave off a luminous halo, came three small humanoids wearing metallic clothes like wetsuits.
The humanoids stopped at his cage of rabbits while communicating with each other by emitting strange noises. Amerigo thought they were going to steal his rabbits so he inside to get a shotgun to repel the intrusion of the mysterious visitors.
When he came back outside, he pointed his gun at the humanoids and pulled the trigger, but the shotgun did not shoot, and suddenly became so heavy that he had to let it fall to the ground.
The farmer felt paralyzed and could not move. Then the little creatures grabbed all rabbits in the cage and returned to their ship.


The object took off in total silence, leaving behind a luminous trail. Amerigo then regained mobility but had no time to use his gun against the artifact because it was out of reach ...  The little "aliens" stole his 12 rabbits and the cage ...