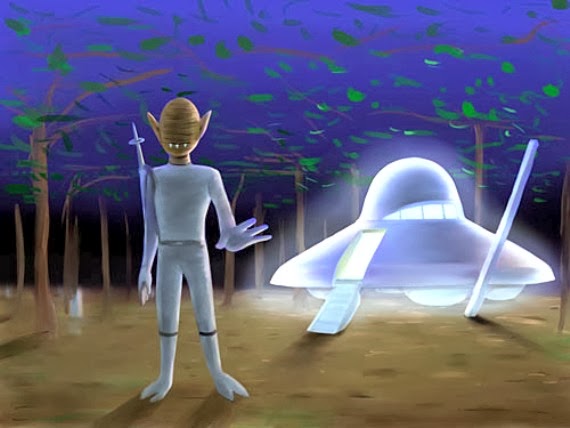 
The grotesque visitor seemed inspecting the surrounding area ignoring the amazed witnesses. From a distance the children could see that within the device had another occupant, smaller than his companion, who was with a console full of buttons. But at one moment, the "being" walking along the outside,  quickly approached to Yamahata, giving two pats on the shoulder. The humanoid spoke in a strange language, like the sound of a cassette tape heard backwards. The boy fell to the floor, said his partner, because he felt scared to death when he saw the monster space beside him. Kawano reacted quickly helping to reincorporated his friend and both fled the scene. When arriving home, almost in panic and very nervous, the children narrated their terrifying encounter. Intrigued by the amazing story of children their mothers decided to go to the vineyard to check the testimony of the schoolboys. According to the press said women could see for at least 5 minutes a dazzling orange light flashing on the vineyard. Yamahata and Kawano wanted to approach the place, but before the group decided to approach, there was a powerful burst of light and the artifact flew up in the sky quickly. Many other witnesses were located by a local journalist, Yamanashi Nichi-Nichi Shimbun (Daily News), which confirmed the presence of strange lights in the área.
﻿


When the story was known in school, Yamashiro center several officials rushed to the scene to investigate the alleged landing. There they found two broken cement posts and violently displaced and various strange footprints in the earth that seemed to indicate that something big had been there. In addition to corroborate the testimony of students, one of the teachers said they had detected radioactivity within a circular area that was on the ground. The researcher Masaru Mori highlighted two key points of the incident, the surprising consistency of the story of the children, ratified by the center director Nobuyoshi Kaneko, and the existence of strange, unexplained footprints and marks that had appeared in the vineyards. The researcher Bintarou Yamaguchi reported the extraordinary resemblance of the monstrous entity sighted by children, with a very famous television personality in Japan since 1967, called precisely "Alien Hook". Also both in the TV series, like some toys at the time, various monsters and infantile personages were depicted with huge fangs. It is also interesting to note that in the "Outers Limits" series in an episode broadcast in 1964, and titled "Keeper of the Purple Twilight" was starring aliens very similar to the Japanese visitor without eyes ...
JOSE ANTONIO CARAV@CA
Publicado por jacarav@ca en 20:48