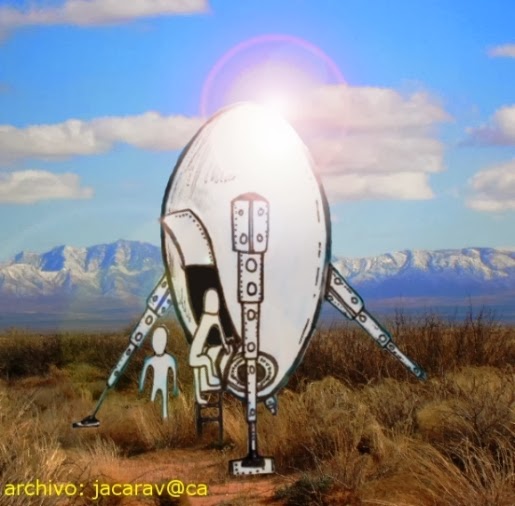 The event and its body of evidence is sometimes deemed one of the best documented, yet most perplexing UFO reports. It was immediately investigated by the U.S. Army, U.S. Air Force, and FBI, and received considerable coverage in the mass media. It was one of the cases that helped persuade astronomer J. Allen Hynek, one of the primary investigators for the Air Force, that some UFO reports represented an intriguing mystery. After extensive investigation, the AF's Project Blue Book was unable to come up with a conventional explanation and listed the case as an "unknown". (Source Wikipedia)

BEHIND THE LIMITS OF DISTORTION
Curiously in the famous television series science fiction "The Outer Limits", in a chapter issued October 28, 1963 titled "The Man who was Never Born", showed  a spaceship that has some similarities with the object observed Lonnie Zamora. In both cases these aircraft landing vertically, leaking and supported at its lower part with telescopic legs. also one of the
crew wore white, in coincidence with the small humanoids described by the police. Also the circumstance that the fiction spacecraft lands on a desert  is given. Lonnie Zamora Did he see this episode of "The outher Limits"? ..

If we continue the premise of the theory of distortion when the unknown external agent, syntonized (contact) with the psyche of the witness,

could extract this unconscious information for "making" , so distorted, his UFO "close encounter". Also it is also significant that the symbol observed by the police officer resembles a traffic sign?.﻿﻿﻿﻿﻿

And if that were not enough, the traces found after the disappearance of the artifact are identical to those that could have caused a terrestrial aircraft (tracks, burns, sand vitrification, high temperatures, etc.)
Definitely the Zamora incident remains one of the most intriguing UFO encounters that occurred in the world ... will continue to investigate ...