CLOSE ENCOUNTER WITH THE "APOLLO XI": DISTORTION IN IMAGES 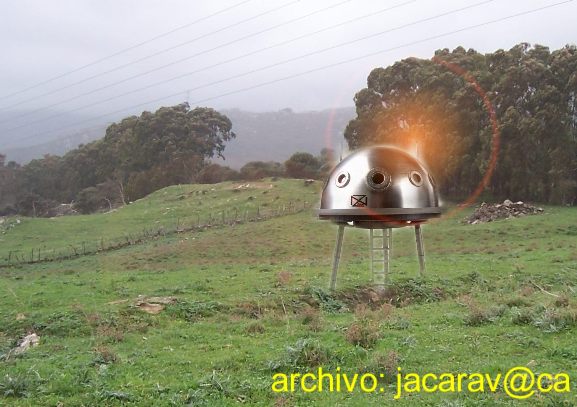 On March 12, 1981, Juan Gonzalez Santos, 42, was driving his van on the highway N-340(Algeciras-Cádiz). Suddenly lights among the trees caught his attention. The light, in the words of the witness, was very similar to the flashes of an ambulance or police car. He stopped his car because he thought it was an accident (Juan belonged to Civil Protection, Cruz Roja). As he approached, he observed that it was a strange metallic object, white, dome-shaped, with lights flashing on top.
Days before his encounter, Juan Gonzalez had seen a television documentary about the man on the Moon. So, he thought that the artifact could be a lunar-lander and the crew U.S. astronauts.
The object had circular windows, and inside, Juan saw "people" dressed in tight-fitting brown suits.
The head was covered except for the face. Over the ears were what looked like headphones. The object rested on three telescopic legs, the legs terminating in a bowl-shaped piece (pan). Also there was a central staircase. On the fuselage, he saw a black symbol resembling a swastika. The witness tried to approach the object, but a flash of light prevented him doing so. After 15 or 20 minutes of observation, the object rose up and disappeared in the distance. During the experience, no vehicles
appeared on the highway -- very strange because the N-340 usually has much traffic. 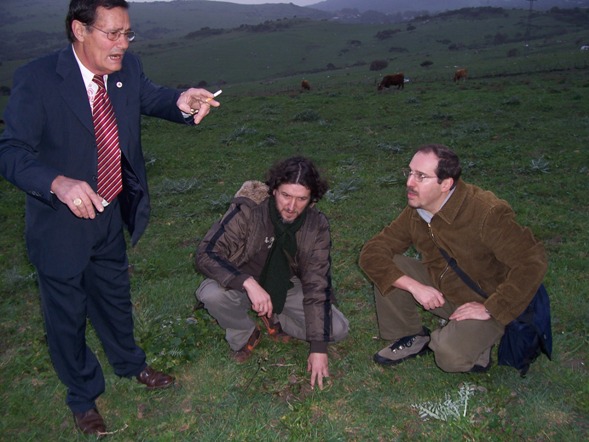 (The drawings and sketches presented in this report are copied from those made in the 80's, by researcher JJ Benítez, in his book "La punta del Iceberg" from 1983, so they have not been altered by me to coincide with my inquiries.) In this spectacular event, not only can we trace the influence of the (mental) distortion in the creation of the experience, we can also see, with pictures, how it developed:


1 Juan Gonzalez Santos observed a bright flare-like lights of an ambulance or police car. The witness belonged to Civil Protection and participated in operations with Fire, police and ambulances. 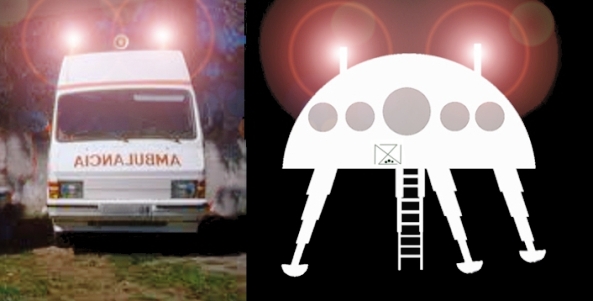 2.-  The device looked like a LEM. Days before he had seen a television documentary on the Apollo XI. The artifact seemed to be the product of a mental distortion of the Eagle module.

3 When very close to the object, the witness observed two bumps on the top of the object that emitted flashes of light. (One can see that the bumps are exactly equal to the arrangement of the lights of an ambulance with the Civil Protection he drove for his work.


4 The landing legs at the bottom were like bowl-shaped objects. The similarity (Distortion) with Eagle's (Lunar Lander) legs are obvious.

5 The crew of the UFO had headphones and a suit that covered the entire body except the face. Same as Neil Armstrong's space suit.

6 The symbol observed by the witness could be due to the distortion, probably one of these two elements:

a. The Nazi swastika. The author found that the witness knew well the existence of the emblem used by Germany in WWII, which I think is the possibility for the distortion.

b. The Central Nuclear de Santa Maria de Garona (Burgos, Spain) has a similar symbol, and was well known at the time of the encounter via newspapers and television. 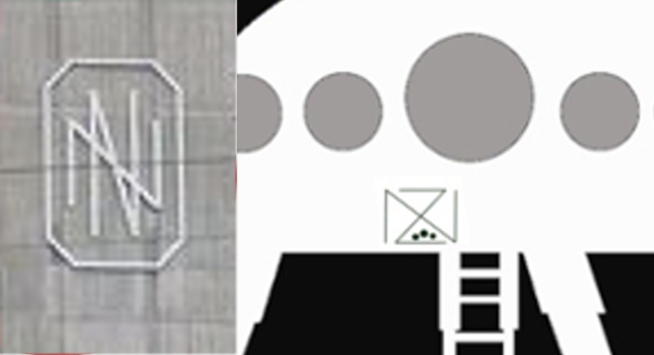 We found that the psychic influence is very present in this UFO landing, and have even shown the images that could cause the (mental level) distortion. The observation of the documentary about the Apollo XI is the main information for the unconscious creation of the experience with other aspects of daily life of the witness (ambulances, lights, swastikas) transformed into alien elements, thanks to the presence of distortion.
In the field, the researchers found three footprints, to show that the experience had not been the product of a simple hallucination. The “distortion” is somewhat more complex ...